Patricia is an architect and masterplanner at Shepheard Epstein Hunter and her experience includes Space Park Leicester, Warneford Hospital and other university projects. She holds a Master of Architecture in Urban Design from Harvard, and a PhD in Sustainable Urban Design from the Architectural Association in London.

Email link to this page

There is a general misconception about the relationship between cities and landscape. We tend to think of cities as independent man-made entities, in opposition to the natural and harmonious landscape surrounding them. However, this is a false and archaic myth, whose root comes from the pastoralism of the 17th century that celebrated the humbled harmonious and healthy life of the countryside. But, cities transcend their administrative boundaries—what we call urban areas. In fact, they are intrinsically connected to their surrounding landscape, establishing continuous flows of matter (food, water, waste, etc.) and energy.

Contemporary views define cities as complex systems of flows analogous to living organisms or ecosystems. Unlike natural ecosystems, however, the cycles of energy and matter in urban ecosystems have an influence not only locally but also globally. Resources and waste routes usually cross over local boundaries, and pollution generated in cities has a worldwide impact.

A growing global population and its increasing consumption are posing a huge pressure on land for food production. Roughly 50% of the world’s surface area has been converted to grazed land or cultivated crops and more than half of the world’s forests have been lost in that land conversion. Sustainable urban development must therefore seek to achieve a deeper understanding of human ecology.

As architects and urban designers, we are interested in the impact of food production on design. Though it is often not evident, there are many examples in which the way we produce food is transforming the land and defining the territory around us. Here are some of them:

New Zealand is the most productive landscape in the world. It exports from wine to lamb everywhere in the planet. China is its major client and exports to this country have grown by 2,100 percent since 2006. New Zealand dairy products are sold to more than 45 countries and account for one third of the global dairy trade. However, 99.5% of all plant and animal species in New Zealand have been imported. The first mammals were brought by humans as cattle when they occupied the island. Since then, most animal species have been brought with the sole purpose of food production, transforming the natural land into a man-made landscape.

Food production also shapes water bodies such as sea coasts. China, with one-fifth of the world's population, accounts for two-thirds of the world's reported aquaculture production, and since 2005 is the world's largest exporter of fish and fish products. The images below show the transformation of the Chinese seacoast from 1979 to 2000 due to fishing. 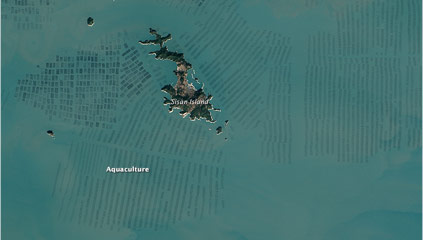 Technology has enabled the optimisation of the food production process as well as the improvement of the quality of life of farmers. Technology has also enabled us to scale food production to unthinkable scales and places. The optimisation of irrigation systems has transformed the landscape into a pattern of equal circles only perceptible from the air, from the US Middle West to the dessert of Saudi Arabia. Thanks to technological advancements, Saudi Arabia is able to milk 65,000 cows, taking underground water from 1,000 m. depth. But this process entails an enormous use of energy and resources. 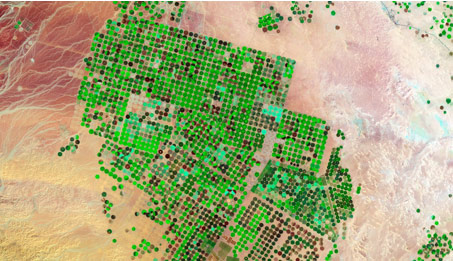 The way we consume food is transforming the planet, and we, as architects, have a powerful tool to guide this transformation. By giving form to these issues, we are able to start a debate within the population. Many architects have thought about this before: from Hilberseimer’s rational new city, and Frank Lloyd Wright's agro-urban settlements, to the 90’s proposal by Branzi for a 'blurred city' where people, cattle and agricultural fields share space, addressing the issue of our current disconnection from the food production process. Similarly, various architects today are dealing with issues of food production and proposing urban scenarios and buildings that integrate local food production. As one of the most pressing challenges of humanity for the near future, food production needs a wide set of skills to better manage our planet’s landscapes and balance human needs.